* Waiting for an Amputation

I was very frightened of surgery and so I asked Jesus to surround me with one thousand angels to protect me.

On the day of surgery, I noticed so many clouds outside of my window and then a few minutes later I noticed they were getting lower.  This I thought to be very strange.  Stranger still... OMG !!!

I noticed they were all different shapes, sizes, some kneeling, some standing, some seemed to be praying.  These clouds were not clouds.  I could see details.  They were Angels.

Right in the middle of it all was a slender tall man.  He turned to me and I could hear his "Thunderous" voice.   As he looked at me and raised his arm and pointed towards me he said,  "For You!" I had asked Jesus for this favor, could that  have been him?  I was surrounded by 1,000 angels.  Ask and you shall receive.  Believe with an open heart.  Miracles are all around us. 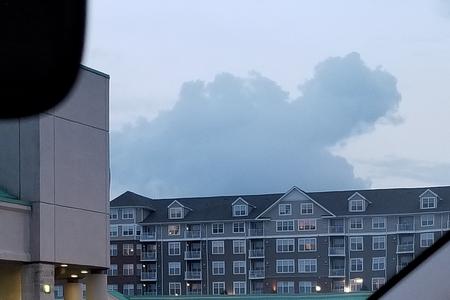 * An angel and a  shopping cart are your best friends.

One late afternoon I was in Staples Office Supply store.  On my way out I was about to empty my shopping cart and carry my packages to the car.  (This is something that I normally don't do.  I always keep the cart.)  Just at that moment, a voice told me to "keep the cart and be careful going to the car.  He is going to ask for money, don't give it to him.  Keep watch."

Well, I placed my packages back into the cart and proceeded to the car.  As I was walking across the lot a young man walked toward me and called to me to wait.  I did not wait but kept careful watch of him as I loaded the car purse first.  He did ask for money.

I told him I didn't have any change and kept my shopping cart in between us the whole time.   As I was driving away I felt badly for him as perhaps he was thirsty  but then I realized that my angels would not have warned me against this young man.  If it was the case that he was thirsty I'm sure the angels would have told me to give him some money without fear.

Before I left the parking lot I did call the store manager and tell him what transpired.  He called the police and I began on my way stopping abruptly.  I looked up and noticed the sky getting cloudy with grey clouds begining to form and there in the clouds was a huge angel looking at me from above.  (This image was much clearer a few minutes before but I had not yet thought of taking a picture.  If I had, his back would have been much more defined in the way of angel wings.)

*  Please people remember this:  Always use a shopping cart and keep it strong in between you and  anyone around whom you may be concerned about possibly wanting to hurt you.  A shopping cart can save your life.  At the least you can push it into a would-be mugger and buy yourself some time to get away.

A Few years ago, mom asked me to take her taxes to Hackensack, NJ.  and deliver them to her accountant.  I went up to Nancy's office, gave the papers and left.  On the way down in the elevator, I heard a message come through.  "He's going to try and mug you!  Stay strong and it won't happen."

For a moment, I thought perhaps he was waiting outside the elevator but no, just a sweet little old lady got on as I was stepping out.  I walked outside and down a straight sidewalk.  As I got about half way down the walk, a guy started walking on the sidewalk at the street so that our paths would have to intercept.  He had Brown longish hair, and looked sort of like a dirty, overweight Eddie Van Halen, the famous band guitarist.  I had been keeping an eye on him from the moment I spotted him when I walked outside.  I kept calm and changed my direction.

He changed his direction.  I changed again walking the other way.  He changed direction so to intercept me again.  I got to the street so I could get to the car.  It was a quiet side street no one really on it.  He stepped quickly to meet me and started talking.

I don't know where the voice came from,  deep within me and I shouted "NOOOOOOO !!!" right in his face.   He jumped back almost frightened that someone would hear me, and stumbling on his words "hey I wasn't doing anything."  "Well" I said, as nasty as I could, "I'm having a Bad Day."  I rushed past him. He followed.  I quickened my steps he quickened his.  I beeped the car to unlock the doors, I ran for it, pulled open the driver side door, threw my purse into the car, hopped in and pulled the door shut and quickly locked it.  All this happened and as I locked the car he reached it.

Was I frightened.  You Bet.  I'm still upset with myself that I didn't call the police.  I just wanted to get home.  I did call mom and told her to call Nancy and tell her to be careful.  I feel completely irresponsible by not calling the police and as of this writing I have made an appointment to go look at their photos.  His appearance was burned into my mind and I can still see him.